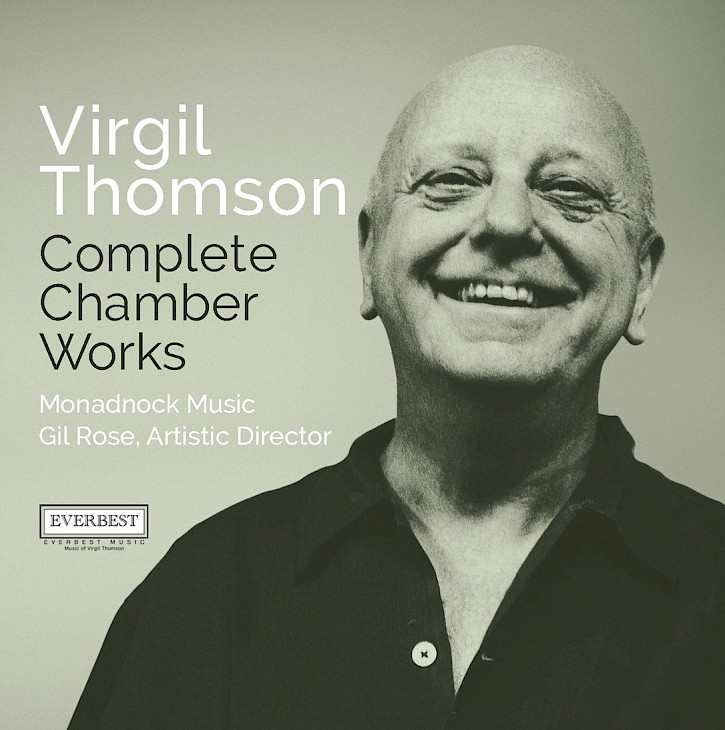 A champion of American music and arguably America’s greatest composer-critic, Thomson was, as Aaron Copland hailed him, “about as original a personality as America can boast…the Father of American Music.” And it is in Thomson’s chamber music that one can see that personality play out via the intimate sparks that animated his wide-ranging artistic community, whether he was in Paris or New York City. His witty and touching musical compositions are marked by a fascinating mixture of spontaneity and concision, lyricism and playfulness, nostalgia and tough-mindedness.

Recorded at the 2012 Monadnock Music Festival and produced by Monadnock’s former Artist Director/Grammy Award-winning conductor Gil Rose, each of the two discs of Virgil Thomson: Complete Chamber Works opens with a world premiere recording: the modern curtain-raisers for chamber group, A Short Fanfare and Stockton Fanfare. Also receiving its recording debut is Le Bains-bar, a chamber work for violin and piano from Thomson’s European days in 1929. Thomson arranged the piece for trumpet and piano in 1949 and titled it At the Beach, a work also appearing on this album.

The recording brings together several of the works Thomson valued most highly including the radical Sonata da Chiesa, which helped establish the young composer in French musical and literary circles. Commenting on this work, the critic Thomson reviewed the composer Thomson: “Leaving aside two ill-advised experiments, the instrumentation is unquestionably a knockout. The chorale is a genuine new idea, the other movements decently satisfactory...The public awaits (or ought to) with eagerness Mr. Thomson’s next work.”

Between 1930 and 1932, Thomson had concentrated intently on composing for strings: two string quartets, Sonata for Violin and Piano, Serenade for Flute and Violin, and Stabat Mater for soprano and string quartet. Composer Ned Rorem, who served as Thomson’s assistant in the late 1940s, and was himself a prolific writer of prose, was especially fond of this work, which he praised as “guileless.” The bold String Quartet No. 2 is among Thomson’s most illustrious chamber works with a lively first movement that rewards the listener with its audacious forward thrust.

The album also features chamber renditions of Thomson’s signature portrait series. From artists including Gertrude Stein, poet Georges Hugnet, and painter Frederic James, to friends and associates during his days in Paris, New York, and Massachusetts, Thomson’s portrait subjects were of friends, colleagues, and benefactors, the vast majority done “from life.” Thomson and his subject would sit in silence, the composer absorbing the subject’s presence and sketching on staff paper. The album’s portraits were composed between 1929 and 1984 (five years before his death) with the earliest being Five Portraits for Four Clarinets. Thomson composed more than 150 of these musical tributes over the course of his career.

Virgil Thomson (1896–1989) was a many-faceted composer of great originality and a music critic of singular brilliance. After studying at Harvard, he moved to Paris to study with Nadia Boulanger, and remained in France for most of the next 15 years, meeting Cocteau, Stravinsky, Satie and the artists of Les Six. When he finally returned to the US in 1940, he became chief music critic for the New York Herald Tribune. Thomson composed in almost every genre, utilizing a style marked by sharp wit and overt playfulness, and produced a highly original body of work rooted in American speech rhythms and hymnbook harmony. Among his most famous works are the operas Four Saints in Three Acts and The Mother of Us All (both with texts by Gertrude Stein), scores to The Plow That Broke the Plains and The River (films by Pare Lorentz), and Louisiana Story (film by Robert Flaherty). In addition to his compositions, he was the author of eight books, including an autobiography. Included in his many honors and awards are the Pulitzer Prize, a Brandeis Award, the Gold Medal for Music from the American Academy of Arts and Letters, the National Book Circle Award, and the Kennedy Center Honors. The 25th anniversary of his death was commemorated during 2014. www.virgilthomson.org